Posted on June 30, 2014 by NotYourNormalSteam

I think the best part of this party was the food. It was a lot of fun coming up with dinosaur themed food. Everyone helped in coming up with the ideas. But I had final say, because the one thing I try to make sure is that almost EVERYTHING can be done in advance.

The food labels were more of the dinosaurs from the Paper Doll Dress Up cartridge. I used some brown and blue glimer mist to make the eggs speckled and some red stickles to make the lava.

Appetizers:
I try to make sure that we always have lots of fruit, veggies and cheese for appetizers. That way I know the kids will have things to eat even if they won’t eat dinner. Plus the dip, veggies, deviled eggs, and fruit salad could all be made the day before. The only thing that I did the day of the party for appetizers was carve the T-rex head and make the palm tree from a green pepper, carrot and 1/2 a potato. 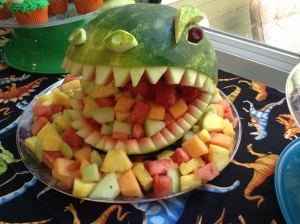 Dinner:
BBQ ribs are one of Miss M’s favorite things to eat (mine too), plus with the dino theme it seemed like a no brainer. But I know lots of kids won’t eat them which is why I also did chicken wings. The ribs and wings were cooked in the oven the day before, and Mr Steam just finished them off on the grill the day of the party.  The potato casserole was assembled the day before and baked at the time of the party. I cheated on the cole slaw and got that from the deli. I don’t what my problem is, I can cook almost anything, but I have yet to make cole slaw that I like. 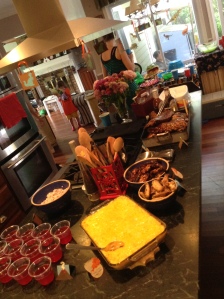 There were so many great ideas for dinosaur themed cupcakes it was really hard to pick one. So, I picked two. It worked out for the best anyway, because Ms M loves chocolate frosting and N will NOT eat it.

I used red candy melts to make the erupting lava, and then red gel frosting to make the lava flow.

I purchased speckled malted milk balls at Easter for the dinosaur eggs. Then used green butter cream frosting with a grass tip to make the nests. Then little dinosaurs finished off the cupcake.

The important part was the birthday girl thought all the food was delicious and loved her volcano cupcake.

I love to make things, food, paper, fabric, the medium doesn’t really matter. I am also an obsessive planner. The day after Christmas I am already working out plans for the next year.
View all posts by NotYourNormalSteam →
This entry was posted in Precious Parties and tagged Birthday, cupcakes, Dino, Dinosaur, DIY, food. Bookmark the permalink.

I'd love to hear from you! Please leave a comment. Cancel reply